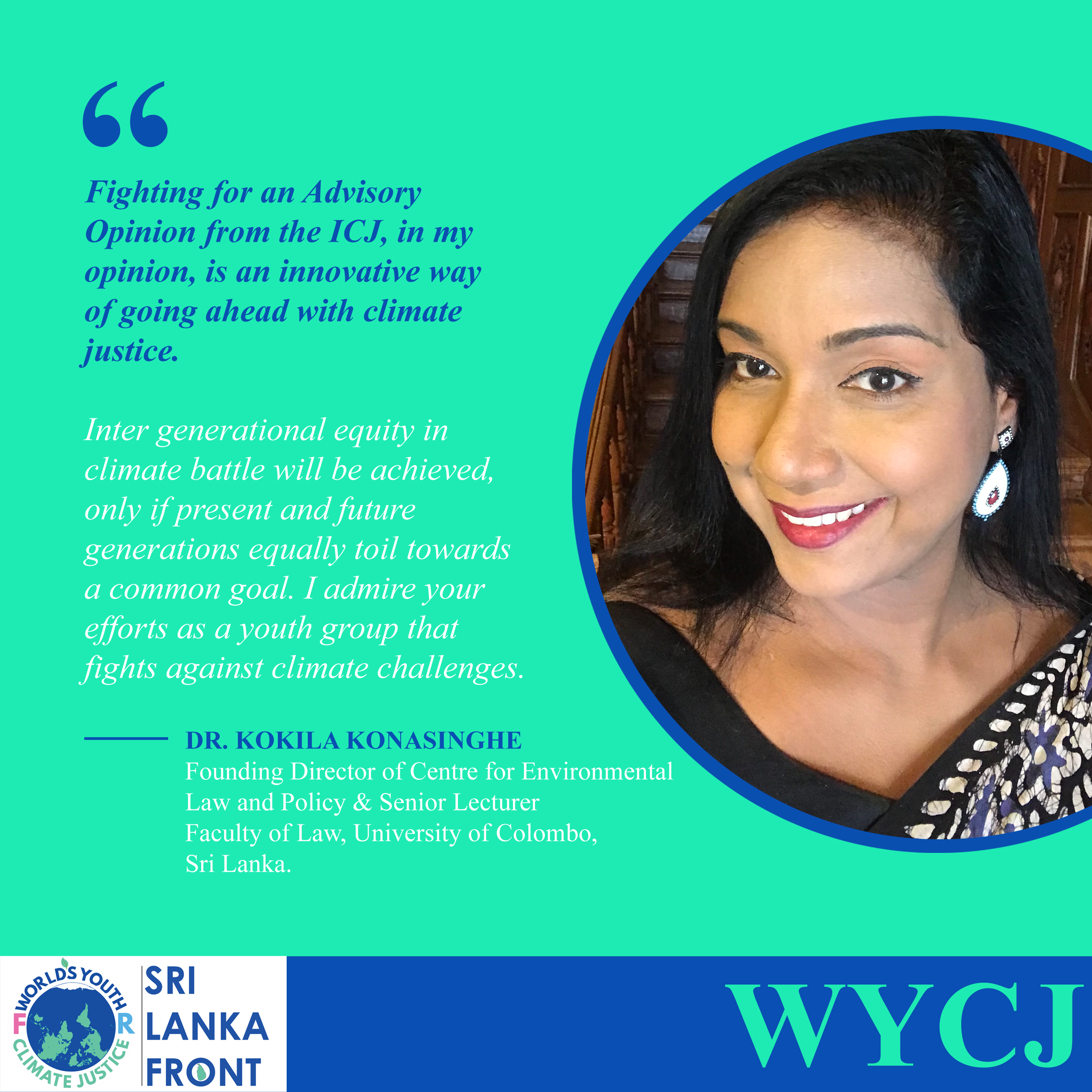 Bringing the world’s biggest problem to the world’s highest court: the World’s Youth for Climate Justice (“WYCJ”) is seeking an Advisory Opinion from the International Court of Justice, to contribute to the progressive development of international law on human rights and the climate crisis. The WYCJ is seeking the support of state and non-state actors in a bid to secure the rights of present and future generations.

Human rights and the climate crisis

The link between the climate crisis and human rights is now well established. Climate impacts have been shown to exacerbate pre-existing inequalities and human rights challenges such as poverty, health and well-being, wealth inequality, gender relations, and many others, and to affect vulnerable groups most acutely. Many people’s current and future ability to enjoy their human rights to life, water and sanitation, food, education, and self-determination will be greatly impacted by the impacts of climate mitigation and adaptation measures. Achim Steiner, Executive Director of UNDP, remarks “(…) While the United Nations and national governments acknowledge that climate change and the responses to it can impact on human rights, there is less agreement on the corresponding obligations of governments and private actors to address this problem.” An authoritative clarification of the ‘depth of obligations’ is needed.

By giving an Advisory Opinion, the Court can provide impetus for more ambitious action under the Paris Agreement, provide authoritative baselines for state action on mitigation and international cooperation and assistance, integrate areas of international law that are currently separate, namely human rights and environmental law, provide impetus and guidance for domestic, regional and international adjudications, and cement consensus on the scientific evidence of climate change. With young people having contributed the least to historic CO2 emissions, but increasingly facing adverse climate impacts, it is not surprising that youth all over the world are seeking climate justice for current and future generations.

The influence of international courts typically resides not in the coercive enforceability of judgements but instead in the moral and legal authority carried by the considered views of a respected judicial body. The ICJ is the principal judicial organ of the United Nations (“UN”). Organs of the UN and UN specialised agencies are eligible to request an Advisory Opinion from the ICJ. The UN General Assembly (“UNGA”) and the Security Council may request an advisory opinion in respect of ‘any legal question’. Vanuatu has announced that they are seeking to request an Advisory Opinion through the UNGA. We hope for the ICJAO to become a conversation starter, provide much needed legal clarity, and authoritative analysis on existing obligations under international law, so far scattered across different sources of international law.

This demand for authoritative guidance from the Court on climate justice was initiated by students from the Pacific Islands, one of the regions most affected by the climate catastrophe. This leadership with overwhelming moral clarity has received the backing of 139 CSOs and Pacific States, and has inspired youth worldwide to join efforts and push for global cooperation to seek climate justice for current and future generations. On September 25th 2021, the government of Vanuatu announced, their intention to lead on the initiative for an ICJ Advisory Opinion.

Youth of the World

WYCJ is working towards securing global state and non-state support for the ICJ Advisory Opinion. The Campaign has received the support of the UN Special Rapporteur on human rights and the environment, David Boyd, Mary Robinson, and Professor Jorge E. Vinuales.. Youth groups and individuals all around the world are uniting to bring attention to the positive impacts of an Advisory Opinion. The Campaign is spreading the word by story-telling in our communities, communicating with the governments, and peer-educating on the role of international law and the inherent connection between the climate crisis and human rights. For more stories please visit www.wy4cj.org.

The Founding Director of CELP, Dr. Kokila Konasinghe is the first Advisor of the WYCJ Asian Front. Ms. Dulki Seethawaka, a member of CELP holds the position of Strategic Coordinator for the WYCJ Asian front. CELP intends to lead the national campaign in Sri Lanka and assist in spreading public awareness about the campaign. By Sachitha Dilshan | May 23, 2022 | International Collaborations